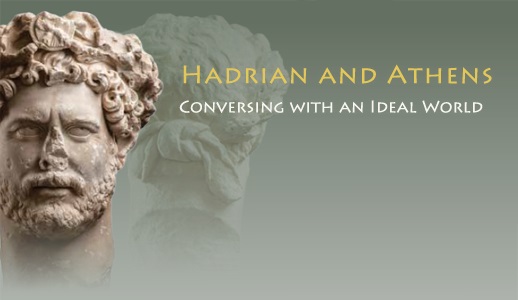 The National Archaeological Museum in collaboration with the Italian Archaeological School at Athens organize the temporary exhibition “Hadrian and Athens. Conversing with an Ideal World” in the Gallery 31a of the Sculpture Collection. The exhibition marks the 1900 years since the beginning of Adrian’s Principate in AD 117, an anniversary that was celebrated in manifold ways by major European museums and cultural institutions.
The Athenian Kosmetai gallery in the permanent exhibition of the Sculpture Collection was selected as the ideal setting for the development of the museological concept. Portraits of the Emperor Hadrian are on display centrally in an imaginary philosophical dialogue about Greek culture with emblematic figures of intellectuals such as Metrodorus, Antonius Polemon and Herodes Atticus. Portraits of Plato and Aristoteles, standing as symbols of Greek philosophical thought, observe the imagined conservation, along with the Kosmetai at the back of the hall, i.e. the officials who were responsible for the intellectual and physical education of the ephebes in the Athenian gymnasia of the imperial period. Through this enriched exhibition narrative, the guardians of the traditional education (paideia) of ancient Athens are approached with new interpretative media that highlight the deep spiritual affinity between Hellenic and Roman culture. The world of the Athenian Gymnasia is also enlivened by a series of representative exhibits and the splendid bust of Antinous, the emperor’s beloved companion, who was deified after his premature death and venerated in the Gymnasia as a model of youthful beauty and vigour.
Duration
28 November 2017 – 28 October 2018
Opening hours (winter hours until 31/03): Monday 13:00-20:00, Tuesday-Sunday 09:00-16:00
Location
Archaeological Museum (map)
source: http://www.thisisathens.org/whats-on/whats-on-in-athens/events-calendar/event/?ev=275
photo:http://www.thisisathens.org/whats-on/whats-on-in-athens/events-calendar/event/?ev=275
Need a place to stay?
visit our website: www.athensviewlofts.gr
This website uses cookies to improve your experience. We'll assume you're ok with this, but you can opt-out if you wish.Accept Reject Read More
Show Again
Necessary Always Enabled
Non-necessary