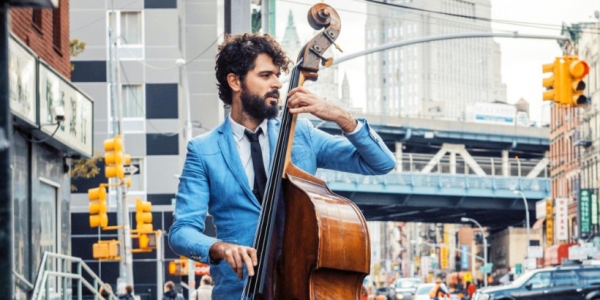 Famous Greek jazz musician Petros Klampanis together with his trio return to the Main Stage of Gazarte with a guest appearance by Greek musician and performer Areti Ketime.

Following successful concerts in Europe, Brazil and Japan, Klampanis will present new tracks from his forthcoming album along with compositions from previous albums “Chroma” and “Minor Dispute”.
About Petros Klampanis
Petros Klampanis grew up on the Greek island of Zakynthos, surrounded by the confluence of Mediterranean and Balkan folk music. To pursue his musical passions, he dropped out of the Polytechnic School in Athens and in 2005 he began his double bass performance studies at the Amsterdam Conservatory. In 2008, he completed his formal studies at the Aaron Copland School of Music in New York. Since his relocation to New York City, Klampanis has performed alongside some of the city’s renowned jazz musicians, including saxophonist Greg Osby, pianist Jean-Michel Pilc, and drummer Ari Hoenig.

source: https://www.xpatathens.com/what-s-on/events-in-athens/music/item/5042-petros-klampanis-trio-at-gazarte
Need a place to stay?
visit our website: www.athensviewlofts.gr
This website uses cookies to improve your experience. We'll assume you're ok with this, but you can opt-out if you wish.Accept Reject Read More
Show Again
Necessary Always Enabled
Non-necessary