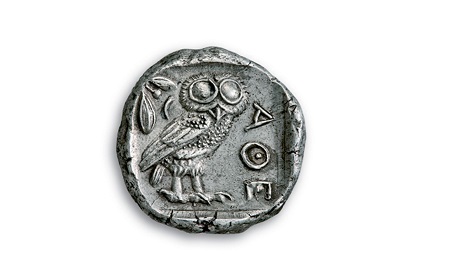 02 November to 15 April
The Museum of Cycladic Art and the Alpha Bank Numismatic Collection, in their first ever collaboration, are organising a major exhibition entitled ‘MONEY. Tangible symbols in ancient Greece’.
The exhibition presents a different side of coins, which first appeared in the late 7th century BC. During antiquity, the coin also had another use, one that is related to its iconography: it was a symbol as well as something that people could hold in their hands, it was a tangible symbol.
The exhibition is structured along eight thematic units, in which 85 coins from the Alpha Bank Collection are exhibited together with 159 objects (clay vases, terracotta figurines, marble and bronze statuettes, reliefs, gold jewellery, measuring vessels, coins from closed assemblages and inscriptions) from 32 archaeological museums and collections in Greece, Italy, France and the United Kingdom, whose iconography is linked directly to each unit’s content.
THEMATIC UNITS
| Money and Transactions
| Money and Trade
| Money and Art
| Money and History
| Money and Circulation of Ideas
| Money and Propaganda
| Money and Society
| Money and Banks

The exhibition is accompanied by a catalogue, in Greek and English, containing information on all exhibits as well as rich photographic material.
Duration: 02/11/2017 until 15/04/2018
Location: Museum of Cycladic Art

source: http://www.thisisathens.org/whats-on/whats-on-in-athens/events-calendar/event/?ev=247
Need a place to stay?
visit our website: www.athensviewlofts.gr
This website uses cookies to improve your experience. We'll assume you're ok with this, but you can opt-out if you wish.Accept Reject Read More
Show Again
Necessary Always Enabled
Non-necessary