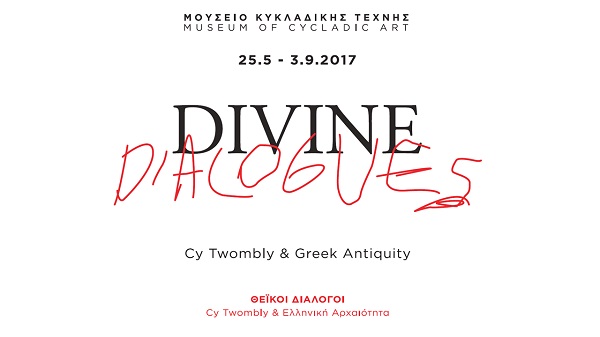 For the first time, 27 works by Cy Twombly inspired by Greek mythology and his close ties with Greece, are presented alongside 12 ancient artworks, revealing a unique and original dialogue between ancient Greek and contemporary art. The exhibition includes representative drawings and sculptures by the contemporary artist, such as Venus (1975), Pan (1975), Nike (1981), Apollo (1975), Dionysus (1975), Orpheus (1979), Aristaeus mourning the loss of his bees (1973) and Aphrodite Anadyomene (1979). These works will “converse” with a series of ancient artworks such as the Torso of Aphrodite Anadyomene from the Archaeological Museum of Paphos, the Relief with representation of Orpheus, Eurydice, and Hermes from the National Archaeological Museum of Naples, the Statue of Dionysus from the Archaeological Museum of Eleusis, the Statuette of Apollo and the Figurine of winged Nike from the National Archaeological Museum of Athens.
Opening hours:
Monday, Wednesday, Friday, Saturday: 10.00-17.00,
Thursday: 10.00-20.00, Sunday: 11.00-17.00,
Tuesday: Closed.
Free guided tours of the exhibition (upon display of valid admission ticket): from June 1st, every Thursday at 18.30
Dates: 25 May – 3 September 2017
Place: Museum of Cycladic Art (map)
Source: Thisisathens.org
Photo credit: thisisathens.org
Need a place to stay?
visit our website: www.athensviewlofts.gr
This website uses cookies to improve your experience. We'll assume you're ok with this, but you can opt-out if you wish.Accept Reject Read More
Show Again
Necessary Always Enabled
Non-necessary